From the Flint Area BackgammoNews, January 2004 issue, that has 1,000 readers
Edited by Carol Joy Cole
http://www.flintbg.com/

I won the Consolation of the Advanced Class of the 52nd Gammon Associates Invitational in Los Angeles, Dec. 5-7. This is my first success in any backgammon tournament. As a commemoration of joy, I want to share my experience, and also tell you about my local club, Gammon Associates.
First, this tournament was almost the last chance for gaining American Backgammon Tour points in 2003, so nine of the top 25 ABT ranking players attended: Ray Fogerlund (CA), Gregg Cattanach (GA), Mike Ungerleider (CA), Ilia Guzei (WI), Dave Cardwell (GA), Howard Markowitz (NV), Steve Sax (CA), Frank Talbot (MI), and Bob Glass (CA). Unfortunately for them, nobody got points, and fortunately for him, Art Grater (CA) won the Open. He earned 21 points in the Open field of 44 and Jumped up to sixth place on the ABT. Tad Bright, the new hope of L.A.’s local club, won third place in the Open. Steve Sax won the Super 32.
Lady players did very well. Linda MacLean (MA), defeated world-class player Frank Talbot. She won a few more matches, and almost reached the prizes. Local club member Judy Collins, whom I respect, defeated Art Benjamin (CA), and many other top players, and she was victorious in the Open Consolation. Also, she bought me in the auction and got a prize from my winning the Advanced Consolation.
There were 23 players in the Advanced Class. I played nine matches, scoring 7 win and 2 losses. All my opponents were nice and gentle. They never spit dirty words, and they didn’t act with a bad attitude when I got lucky. I appreciated them, as I could enjoy all of my matches. [Mirori will discuss those matches in Part 2 next month.]
About my backgammon experience: I used to play Reversi (Othello) on the Internet. My Reversi teacher was Mr. Masanori Itikawa. He also plays backgammon (GamesGrid ID : Othello). So, I started learning backgammon from him in 1999. After I understood the rules, I joined GamesGrid (member ID: Mirori). The beginning rating was 1500, but mine kept sliding down. My rating stopped going down at 1300, and started going up little by little. I studied hard with Itikawa and Snowie2. After six months, my experience was 10,000 games, and my rating went up to 1670.
After a two-year break, I started playing online again at FIBS in 2002. And I found a free backgammon analysis program, GNU Backgammon. This program taught me a lot. My FIBS rating rose to 1842, and my GamesGrid rating went up to 1822. In October 2002, I entered the Beginner Class of the Japan Open. This was the first time I played backgammon over the board instead of online. I met many good players there: Jake Jacobs, Emil Mortuk, Kazuko Numazawa, other top Japanese players, and Frank Talbot, who won the Japan Open that year. I enjoyed my first tournament, and met nice people, but after playing on the board, I realized I could not count pips. Now, I am learning about Nack Ballard’s pip count system, Naccel.
About my local club: I appreciated that Mr. Yasuo Mishima led me to Gammon Associates in Los Angeles, where I met Director Patrick Gibson. Patrick treats club members as his big family, and he is always fair to all players. I have played at his club every Tuesday since March 2003. Club members are very nice and kind. And there are many great players here. I learned the sincerity of the game from Norm Wiggins, and I learned the passion and concentration from Steve Sax, Ray Fogerlund, and Sho Sengoku. I will keep learning from them.
I am filled with delight at my first successful tournament, although it was only the Consolation of the Advanced Class. My thanks to people whom I met at this tournament, the people who introduced backgammon to me, and my favorite local club members. My backgammon life has just started. I will try to grow up to be a World Class Player in the future. Please watch out for me!
[Gammon Associated holds tournaments on Tuesdays at the Acapulco Cantina in Burbank, near Universal Studios, starting at 6:00pm. The club also holds Sunday tournaments at 2:00pm in Los Angeles at the A.R. Private Club on Beverly Blvd. Check the club website at : http://users.adelphia.net/~pgibsonmfic/ ] 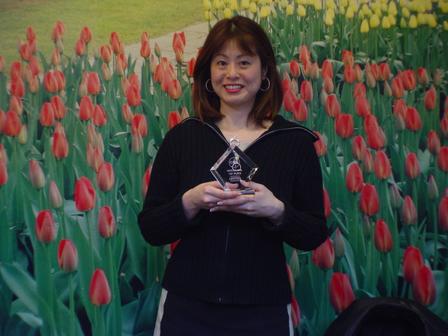 Here’s a closer look at my matches from the Gammon Associates Invitational in L.A. last December. There were 70 players at the tournament, 23 in the Advanced Class where I won a trophy. I had to play nine matches. My second round was against Sandy Barnes.

It was 89% sure that I would give him a chance of one shot unless I rolled 6-6, 3-3 or 6-4. However, it was only one shot, and I was ahead in pip count, so I redoubled to 8. He took. I would win this game and this match quickly with the 8-cube. Snowie 4 confirms this was a redouble, take. (Cubeful equity = +0.622.)
My third round was against Charles Toots. The score became 5-0 to 9 points in my favor. At 4-away, 9-away, my match-winning chances were 78%. I needed to be very careful about a gammon loss. Art Benjamin had given me good advice about this score. In spite of it, I made a big mistake here.

I was too eager to win the match. Each of us needed two rolls to finish, unless we rolled doubles. I thought I could win and finish this match quickly by giving Charles a 4-cube. He took it. Snowie issued this Alert: wrong double ( -0.926)!
I rolled 5-3. He returned the cube at 8 of course, and then he rolled 5-5! His decision and action were perfect. The score reversed 8-6, his favor. Snowie says the proper cube action is no redouble, take (61.2%). Even if our three checkers were all on the ace-point, I still should not double at this score.
Fortunately, I got lucky in the next two games and won the match against Charles.
In the fourth round, I lost to Sina Bigdeli. He was tough, and he went on to win first place in the Advanced. My fifth round (in Second Chance) was against Stephen Gradijan, and again in the eighth round (Consolation). He was nice, and played very logically. I got lucky to win both matches. In the sixth round, I lost to Jay Cordes. At DMP, I made a prime first, but then he made a prime, and my back man could not escape. I should be more careful about that!
My seventh round was in the Consolation against David Taniguchi.

David redoubled me to finish the match. I did not want to risk the match on this checker position, and I would have passed if the opponent were not Taniguchi. But since he was a good friend of mine, I would be glad if he won. So, I decided to prepare for losing unless I could get lucky. I took the cube, and he rolled 5-2, moving 23/21 (splitting to my 4-point), 6/1.
I rolled 5-2, hitting and making my 4-point. David then came in from the bar immediately and had to break his prime. I won the match. My logical thinking was wrong on probability, but fortunately, my sentimental thinking led me to the right decision on probability.
My ninth round was the Consolation finals against Richard Armbruster. The score went back and forth. We played nine games, and at last, I won the 7-point match. Richard was very nice and praised my back game, “You played beautifully.”   I was thrilled to win the Consolation trophy.

Mirori Okuma comes to us from Japan, and she now lives in Anaheim, California. She credits the Gammon Associates Club and Snowie for her enjoyment and success with backgammon. She recently won the Friday the 13th Doubles Tournament in Los Angeles with Richard Armbruster. `